What the experts say… 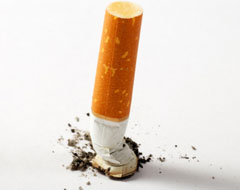 Hypnosis is the most effective way of giving up smoking, according to the largest ever scientific comparison of ways of breaking the habit. A meta-analysis, statistically combining results of more than 600 studies of 72,000 people from America and Europe to compare various methods of quitting. On average, hypnosis was over three times as effective as nicotine replacement methods and 15 times as effective as trying to quit alone.

University of Iowa, Journal of Applied Psychology, How One in Five Give Up Smoking. October 1992.

Of 43 consecutive patients undergoing this treatment protocol, 39 reported remaining abstinent from tobacco use at follow-up (6 months to 3 years post-treatment). This represents a 90.6% success rate using hypnosis.

87% Reported Abstinence From Tobacco Use With Hypnosis

A field study of 93 male and 93 female CMHC outpatients examined the facilitation of smoking cessation by using hypnosis. At 3-month follow-up, 86% of the men and 87% of the women reported continued abstinence from the use of tobacco using hypnosis.

81% Reported They Had Stopped Smoking After Hypnosis

Thirty smokers enrolled in an HMO were referred by their primary physician for treatment. Twenty-one patients returned after an initial consultation and received hypnosis for smoking cessation. At the end of treatment, 81% of those patients reported that they had stopped smoking, and 48% reported abstinence at 12 months post-treatment.

Study of 71 smokers showed that after a two-year follow up, patients that quit with hypnosis were twice as likely to remain smoke-free than those who quit on their own.

The good news is, it’s never too late to quit.

Some people have had some success using the Champix medication from their GP but is it worth noting the side effects.

Side effects that have been reported to date include the following:

Call today or contact us to discuss how hypnotherapy can help.

What the New Scientist says..

Hypnosis is the most effective way of giving up smoking, according to the largest ever scientific comparison of ways of breaking the habit. Willpower, it turns out, counts for very little.

When choosing a therapist it’s important to consider as much as 30% of the success that you experience will be solely down to the working relationship you develop with the therapist.

You can begin your road to success much quicker by beginning a therapeutic relationship with an individual you unconsciously connect with. Make that connection today.

We use cookies to ensure that we give you the best experience on our website. If you continue to use this site we will assume that you are happy with it.OkPrivacy policy